Petition to not permit TimBeiko to become new ACD facilitator

Due to the now increasingly hostile nature of EIP-1559 and the impending community split the miners do not want TimBeiko to take over the ACD meetings after Hudson leaves. During the upcoming hostile push by the EIP-1559 team Tim has been on the 1559-mining Discord supporting slandeorus remarks against miners, deleting posts against 1559, and banning those that oppose them. Below are just a few of the many problems he is creating in the mining community.

ALL CONTENT HAS BEEN EDITED TO ENSURE COMMENTS ARE NOT TAKEN OUT OF CONTEXT. SORRY FOR THE LARGE IMAGES.

Tim works for Consensus which receives money from Defi to work on 1559 for them. Because of this he will not be a neutral facilitator for any meetings discussing 1559 nor should he decide on meeting agendas to include1559. Please draw your own conclusions. 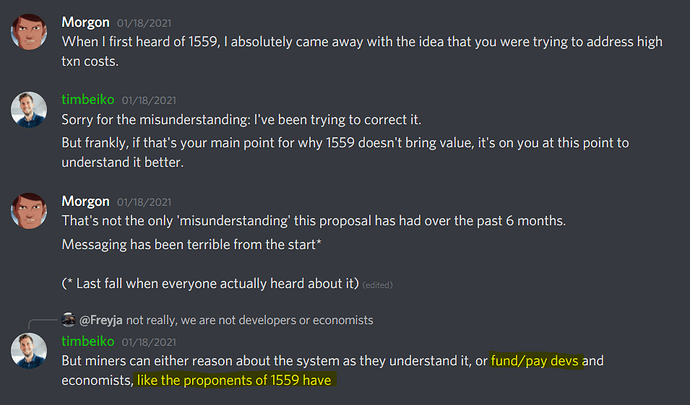 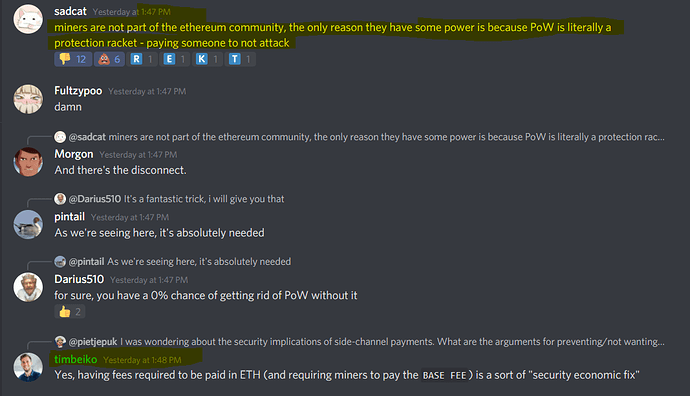 Here is a comment made three minutes after sadcat comment that was not deleted or called out for it. However this comment was deleted and the user banned

Here are other users asking why this comment isn’t deleted and the mods (Tim, Piper, Micah, djrtwo, Butta) not saying that it is wrong and still not deleting the post.
Tim can be seen at the end trying to justify the sadcat comment by saying “When people say “miners aren’t part of the community”, they don’t necessarily mean the individuals as much as to say…”. As if he was speaking for sadcat.

Finally Tim trying to justify sadcats comment after a number of people objected.

Tim is completely against POW mining the way all coins have mined since the beginning. Here he actually stirs the pot with this comment against miners.

EIP-1057 was blessed (approved) for deployment but was not implemented due to it being a “contentious fork”. Tim is already admitting 1559 will be contentious but will still push it through anyway and does not care.

Considers miners comments on EIP-1559 “disruptive”. Gotta say when I went back to try and capture the whole context of this comment my jaw dropped. The comments by fire_kasina were not reprimanded for violating the TOS and in fact Tim backed him up by saying miners have been disruptive. He injected that, not the comment he was responding to, which was a personal attack on miners.

As of today the majority of the community are opposed to 1559 by 62% margin. This means Tim KNOWS it will cause a chain split but continues to push it. 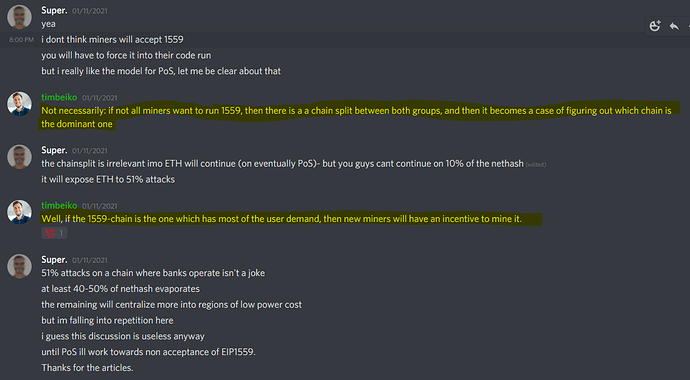 Blockchain is a cooperative effort.

People do blockchain to create a more fair and inclusive world.

Everyone has to be part of decision making. This includes miners, dapps developers, token holders, users etc.

Thats the spirit of opensource movement and blockchain is part of it.

Most people that I know in blockchain would agree to this.

I think some of the comments above have been done in the heat of the moment. Everyone needs to cool and think more logically and fairly.

@CryptoBlockchainTech, I would suggest that you first organize around the basic premise of objecting to his selection for ACD Facilitator before posting evidence supporting your case. These screen shots are taken out of context. Generally, without context, these would even not be usable in any proposal you would make on an ACD call. Placing these screen shots here in this way is not appropriate IMO.

Making a case like the one which you wish to make is a delicate matter and would involve making a well-crafted case to the ACD and others involved in release management e.g. Cat Herders. I understand that you feel strongly about EIP-1559 and believe him to be biased, but please be respectful as you proceed with this effort.

Additionally, this characterization is also not appropriate for this Forum.

It is a fact by Tim’s own admission that he is being paid by Defi to support 1559.

While this is out of context Tim is stating quite clearly he is being paid for 1559. It is up to him now to deny this, his statement stands on itself.

Just to make this clear for anyone reading this: I’ve received 0 compensation outside of my ConsenSys salary for any work on 1559.

What I referred to in my comment was the Gitcoin grant that was raised for 1559 work (none of which got distributed to ConsenSys, although we did receive some funds as part of an EF grant for the work) and the donations from ETH holders to fund Tim Roughgarden’s analysis.

Not worthwhile to engage with the rest of your post, sorry.

Sorry but your words still speak for themself.

That is the EF grant I linked to in the previous post.

I’ve received 0 compensation outside of my ConsenSys salary for any work on 1559.

People are not fools. Money goes to the company you work for, you work on the project, you are being paid by the 1559 proponents. The fact that the check is not made out to you from Defi is meaningless. The money Defi gave consensus supports your salary for 1559. Just admit it and we can move on. Or I can keep going. 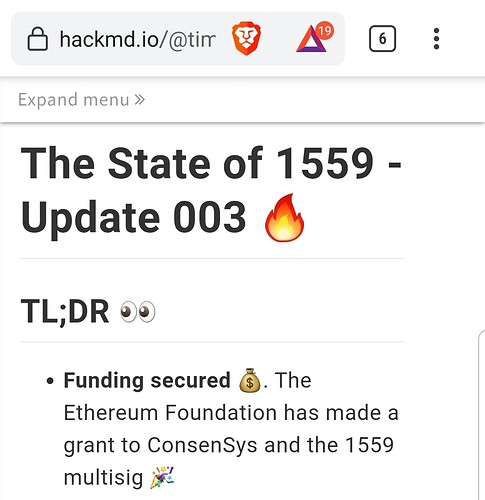 Please keep in mind this is not a personal attack on Tim, it is rough yes, but it needs to be discussed and brought out into the open BEFORE 1559 debate begins for implementation. Surely these questions comming out at that time would not look good.

ACD Facilitator role needs to be neutral and is why Hudson was such a good fit all these years.

@CryptoBlockchainTech, I am going to block this thread because of the following inappropriate actions: 1. using Tim’s statements out of context, and 2. accusing Tim of corruption on very weak evidence. Consider this a warning.

Presenting information in order to demonstrate bias or corruption is very challenging. If carelessly posted, such information becomes misinformation or character defamation. Neither will be tolerated on this Forum.

Organizing a petition to block Tim Beiko’s selection / appointment is not what I have an issue with here. If you wish to proceed with this effort please be more thoughtful.

Sorry for the misunderstanding, I have completed the suggested edits.

If there any further issues with the way I have laid this out I can again edit it.

PS After adding context it looks worse than I originally thought. Thank you for the suggestion.

1559 should not be approved. It is incredibly contentious and therefore risks the security of the blockchain itself.

Since there is concern about context, could you provide the links to the posts in the discord channel, so people can explore the surrounding context more easily?

I would be happy to, but AFK until later today. That being said I will probably pull this post in light of the pending Spark Pool news if true. Will be looking forward to working with the 1559 team soon on a compromise.

I think this post has merit because it still represents the miner’s interests in not having a facilitator that is hostile to their interests. Just because his proposal is being pushed into negotiations doesn’t negate the fact that he still said these things.

The best decision in my opinion is to leave the past behind, relax a bit and for everyone to agree, what the neutrality policy should be for a facilitator.

Since there is no written policy, it is hard to be neutral.

It is hard to argue that pretty much in any democracy the person that coordinates things adheres to some rules. Coordinating things is a search for a compromise.

The Art of War has some great arguments towards the point that respecting your enemy is the best strategy to win.

I think the core thing to avoid is to make statements about feelings and intentions.

If I say someone’s intention is to make money and not to help the project, it is a statement that can per se not be proven or disproven.
How do I know what is inside person’s brain?)

I think the reason why this post was created is that the miners do not feel understood or taken seriously in EIP-1559.

I could link various posts that confirm that like this tweet or excluding miners from the conclusion of this community reachout but that is not the point.

If possible I’d like to ask @souptacular to take over EIP-1559 managment.

I think @timbeiko is exactly the person for management of EIP-1559. We need someone that can defend and implement EIP-1559. @CryptoBlockchainTech your petition is not against Tim, but against EIP-1559 as miners obviously have vested interest in POW. That being said, your attack on Tim as individual is unacceptable and does not lead to constructive dialogue in the community.