Somewhat of an offshoot of this: EIP-1053: A proposal to move the content in ethereum/wiki to a Wikipedia-style wiki site

There has been extensive talk on security and UX, which is arguably outside the scope of the original intent of the Magicians forum as a means to discuss various EIPs, mostly from a protocol improvement perspective.

I wonder if additional “sharding” of these sub-communities of Ethereans would be advisible to ensure forums are both complete and focused on a general area related to Ethereum’s success.

I propose the following 5 groups:

This may be too much too soon, but if there’s one thing I firmly believe in, it’s that there should be 5 groups, because this is pleasing to me: 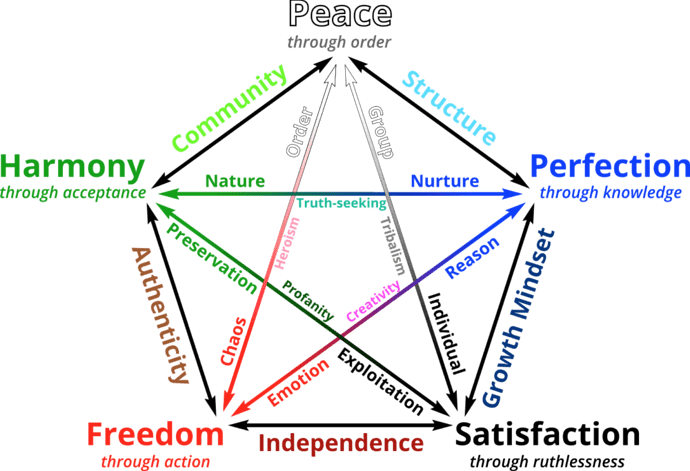 I also want to argue about colors:

EDIT: I could be convinced to change black and white

Are you thinking that these 5 groups would be within the Magicians’ umbrella? Or that they would create communities / services of their own?

One interesting case is the recent emergence of a very specific standards-oriented group called the NFTy Magicians. This is for building and creating standards for non-fungible tokens and composables. It makes me wonder: should all subgroups branch off and do this? Or should there be more of a shared space, allowing for more serendipitous interactions?

Aside: NFTy Magicians are on Discord, and recently have been setting up a Discourse server. Before long there will be a GitHub pages page

The Ethereum Foundation and others also use Discord/Discourse/GHPages. These three seem to embody the default Ethereum community toolset.

I like the serendipitious interaction, but I think the 5 groups I described are ultimately different sets of humans with different goals and discussions that needs to occur. They should not happen in a vacuum, and cross-topic sharing should be allowed. I think from a practical perspective, the volume of conversation and distinction of topic should be the driving force behind a decision to shard; if a topic is self-contained enough and has enough volume to shard (NFTs might be a great example of this) then they should be allowed to. However I think NFTs and composables are ultimately the same class of concerns the Magicians are focused on – discussion around protocol standards and their definitions and practical usage.

If we think about it this way, the other four classes of concerns may suggest additional protocol standards, but they are just as likely to assume existing ones when working on their own goals – a researcher might use an ERC20 in a suggestion for a plasma chain derivative, a security person might suggest that a non standard implementation be more standard, a usability person might discuss a change on standard implemetation to create a more consistent UX, and a governor might use ERC20 to build standard and compliant expectations for governance tokens.

Maybe a better way to describe it might be filters on a single data feed. We already have tags and have been using them fairly effectively, perhaps if there was a way to create endpoints on the Magicians front page that applied these filters on content, that would be enough. But that relies on people properly applying tags to posts, which is an assumption that might prove unwell in practice and require significant editorial direction.

This is sort of thinking about the information lifecycle of Ethereum, where discussion happens and how it gets turned into stone