In the context of https://discuss.walletconnect.org/t/qr-code-data-format/14 - I am thinking about a (Wallet) Connect EIP and would love to gather some Ideas/Feedback.

As the ERC-831 prefix I would suggest “connect”

to encode the shared key I would suggest using base64 - which is easy to parse and saves some bytes compared to the hex encoding (also for making the QR code easier to scan) We should be open to updates from symetric to asymetric here also. Especially when these URLs are not only used for QR-Codes but also for Intents (think connecting a native Android dapp to a Wallet on the same device)

So I would suggest the following URL format:

Maybe “wc” prefix isn’t so bad since it will be mostly viewed by devices and not humans, saving a few characters for displaying the QR code

Regarding symmetric and asymmetric keys, I still think that at least for mobile-to-desktop is best to keep it symmetric but maybe it isn’t secure enough for mobile-to-mobile. However we need to balance user experience with security because WalletConnect is first and foremost a UX improvement to current implementations

Perhaps we should also save a few characters on the parameter names:

Sounds great! Totally happy with shortening to dapp and bridge. With key I lean to keeping symKey to be able to distinguish later on when asymetric keys might be used. Also thinking about it a bit more: why would asymetric crypto here lead to worse UX in this case? I think this could be done without the user even noticing here …

As a follow-up from here: https://discuss.walletconnect.org/t/ideas-for-decentralizing-the-bridge-server/15/4 :

We really should care for changes in the transport layer. In the end I think PSS and/or whisper might an ideal fit here. When using these protocols IMHO we do not even need to add the keys to the URLs then as these protocols care for the encryption. Maybe we do not even need a session-id - but just generate an private per session and use the public key as the session-id.

EDIT: this way we could also get really easy to scan QR-Codes: 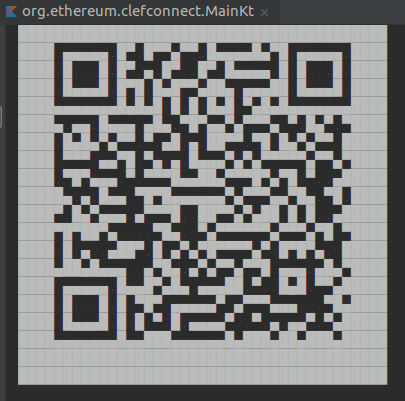 Idea - why don’t we use the very same scheme already today? So instead of the current sessionId we use the public key/address of the session’s private key. So the url would currently look like:

and as soon as PSS or whisper gets usable the URL just changes to:

Why not use checksummed addresses?

Should there be support for ENS-style addresses?

Also string@ patterns seems to be used for user information in URI examples I’ve already seen such as username/password or email name. I could see it being used to pass an account name or private key in a connect URI. Why not use something like &v=2 instead?

Why not use checksummed addresses?

You mean ERC-55? QR codes already do error correction - not yet sure how it would help

Should there be support for ENS-style addresses?

Also string@ patterns seems to be used for user information in URI examples I’ve already seen such as username/password or email name. I could see it being used to pass an account name or private key in a connect URI. Why not use something like &v=2 instead?

I do not see the advantage yet - can you elaborate? I like @version as e.g. @2 is shorter than v=2

Also the version should always be there - the private key might not be.

I’ve created an EIP for this

@ligi would love your review on it!

Still updating the technical specification on the WalletConnect documentation to describe all details of the new protocol version v1.0.0-beta

Here is the first draft of the WalletConnect v1.0.0-beta tech spec, still needs polishing but it should provide a clear enough picture

Let me prefix this (as I often do) by saying I don’t know anything about WebDev. That said, would it make sense to also support web+wc: as a scheme? That would be compatible with Navigator.registerProtocolHandler.

As I think the wallet should not be in the browser context but outside the current solution is more to my liking. But no extreme strong opinion - if you can come up with a real use-case that is possible after switching to it (“also support” is not as easy I think as you can only use one URL nicely)

The Sequence wallet is probably the only use case I know of at the moment, and even they have a browser extension. In addition to web+, ext+ could also work well with WebExtension’s protocol_handlers.

That both sounds like “wallet in the context of the browser” to me. And I also think we should rather walk away from browser extensions rather than going more in that direction. But just my 2WEI.

I don’t disagree about migrating away from extension/web wallets, but they do exist today, and having one library/platform that works for all wallet styles makes it easier for users to switch to the less popular options (like external program wallets.)