There are currently a large number of (optimistic and ZK) rollup projects, at various stages of development. One pattern that is common to almost all of them is the use of temporary training wheels: while a project’s tech is still immature, the project launches early anyway to allow the ecosystem to start forming, but instead of relying fully on its fraud proofs or ZK proofs, there is some kind of multisig that has the ability to force a particular outcome in case there are bugs in the code.

L2beat’s risk analysis page shows a large amount of stats about various rollups, including the status of their training wheels: 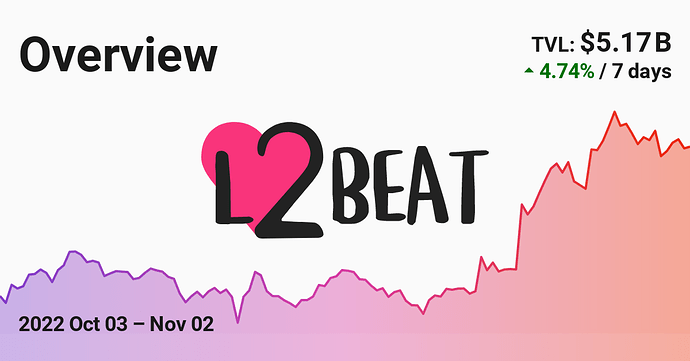 L2BEAT – The state of the layer two ecosystem

L2BEAT is an analytics and research website about Ethereum layer 2 scaling. Here you will find in depth comparison of major protocols live on Ethereum today.

However, as of today this information is not well-standardized, making it difficult for users to understand what specific trust model a particular rollup is using. Rollup teams may even have the incentive to keep quiet about their present-day trust model, focusing the discussion instead on the fully-trustless tomorrow.

This post proposes a simple milestone-based schema to help us categorize rollups into three different stages, depending on how heavily they rely on their training wheels. This is intended to achieve a few goals:

This schema is NOT intended to imply a moral judgement that movement to maximum trust in code as quickly as possible is the only correct course of action. Rollups absolutely should have a clear roadmap to taking off training wheels, but they should take training wheels off only when they are ready.

This somewhat awkward phrasing (“IF the code does not have bugs, THEN no one can override it”) is meant to permit use of security councils in ways that are clearly limited to adjudicating undeniable bugs, such as the following:

Thank you for documenting this proposed framework. Agree that it would be very useful to have a defined framework for rollup classification as they progress through various stages of training wheels.

From the Coinbase perspective, this would be a valuable resources for presenting our users with a standardized risk assessment as they interact and move assets across different rollups. We would be excited to collaborate on fleshing this out and making this a resource that can be standardized across the broader ecosystem.

As currently specified, this seems like a reasonable v0 that we can expand on. One additional requirement I might suggest would be to encode something about the fraud proof or validity proof mechanism being available in such a way (e.g open source) that it can be reviewed by 3rd parties.

Like @jessepollak said, I think this is a good v0 proposal that would benefit the entire rollup ecosystem. As more and more assets are held in rollups, it’s becoming increasingly important for users to have a clear understanding of the security model of the system they’re using. A standardized security framework is going to be a key part of this.

My primary feedback is that there are “nice to haves” that aren’t necessarily covered by a framework like this that can have a real impact on the overall security of the network. For example, the ability to easily preview and upgrade and understand its implications can be the deciding factor between a bug slipping through and a secure system. Of course, that’s not strictly required but, like I said, it’s a nice to have that has a real impact.

IMO a good v1 version of a framework like this looks sort of like a tech/skill tree. You have specific key requirements that are necessary for advancement to the next stage but you can also unlock bonus items that give you “points” but aren’t requirements for advancement. You might be able to extend this model by assigning points and required features such that the requirement for advancement is X number of points and some set of necessary features. Assigning points also reflects the relative value of different features (especially non-critical features) and can help teams prioritize their work.

I’d really like to see comments on this proposal from other rollup teams so we can start to build consensus. Generally, the sooner the better with a framework like this. Rollup risk is only increasing and this is a critical first step in pushing rollups towards real security.

Are permissioned fraud/validity proof schemes considered Stage 1 in this proposal?

I would say yes, as long as any of the members of the security council can initiate the proof. That would be a 1-of-8 trust model, a higher trust-minimization bar than the 3-of-8 assumption already inherent in the multisig.

An upgrade delay of 7 or 30 days is a safety vs liveness trade off that favors safety by forcing a liveness delay - this sounds reasonable But what if there is an urgent need to upgrade quickly? Say a zero day attack or a bug that may enable an attacker to drain funds in a few days? Recall the DAO fork (upgrade) had some urgency. Perhaps a higher level committee (or social consensus?) should allow faster upgrades. One way is via an on chain governance mechanism driven by eth validators or other (more specific) stake holders…

But what if there is an urgent need to upgrade quickly? Say a zero day attack or a bug that may enable an attacker to drain funds in a few days?

Then we’re screwed, and that is a risk that we have to take. This is an unavoidable tradeoff: if we want the system to be secure against 51% attacks on the governance layer, then we have to sacrifice the ability of benign 51% collusions in governance to fix broken code.

Ideas around combining multiple proof systems and only turning on governance when they disagree (the reasoning being that it’s very unlikely they would all be bugged in the same direction) is the best that I can come up with to get the best of both worlds here.

is there an official rollup emoji for community members?

Jumping in to comment that StarkNet is following a different approach, one that doesn’t quite follow these 3 steps. On one hand, we have the main security technology - validity proofs - turned on from the get go, we’ve never submitted a state update to StarkNet without having a STARK proof for it (same holds for all StarkEx systems). So that maps to somewhere between Step 1 and 2 (currently our upgrade period is less than 30 days, so not Step 2). On the other hand, we have decided to deploy decentralized operation at the sequencer+prover level at the very end. Roughly, the steps we’re taking are thus:

The main reason we followed this path is to move fast. Easier to solve functionality and performance when the operators are not yet decentralized.

I love the proposal. One of the things we struggle with in L2BEAT is explaining difficult technical terms to non-tech-savvy users. The risk framework is great, but it’s full of technical jargon. A precise categorization would definitely help us explain risks to users in an easier to comprehend way.

To give folks some idea, with the current framework:

That looks great to me! It would definitely be much clearer to newbies than the current risk framework, which has excellent info but doesn’t really help users understand which properties are more important.

Though perhaps rename “stage” to something clearer like “security level”. And happy to accept alternate namings, tier etc.

Ooh, good point. I guess there are a few paths to take:

I’m inclined to lean toward (1) particularly if we brand “stage 0” as “under construction”, because then users would understand that that’s what stage 0 means and it has very few guarantees. But something like (2) could work too. Maybe survey the ZK-EVM teams on this to get their views?

Hey all, Bartek from l2beat here. We are in the process of finalizing the implementation of the ranking which will be released soon. We are hoping for one last final feedback - please check out l2beat forum post and consider providing your feedback 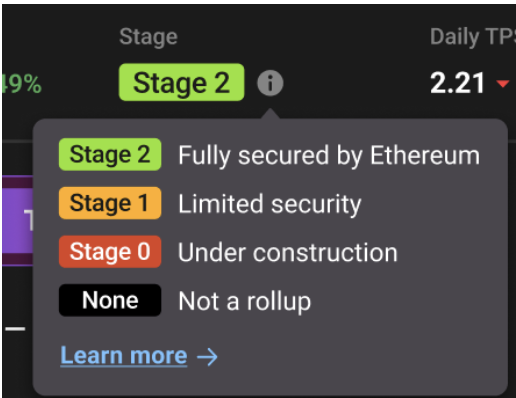 After numerous discussions with the whole l2beat team we have decided to have another round of community feedback before finally releasing our implementation of a “rollup maturity ranking” which is our interpretation of what has been proposed by...

As a teaser, we are still trying to decide if we should go with a simple, linear ranking as proposed by Vitalik, or it is better having slightly more complicated (but hopefully still easy to understand) more multi-faceted maturity ranking that could look like the following mockup. 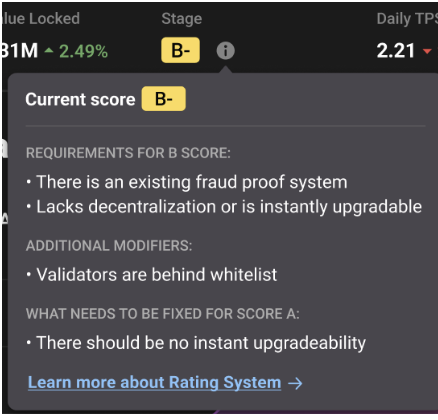