will other magicians attending 35c3? Perhaps we can have some spontaneous sessions there. We might perhaps be able to do this in theCritical Decentralisation Cluster or allocate some workshop room for some sessions. I will also bring some magician stickers to 35c3 - I can also bring some more so they can be relayed to local groups.

Should nothing go horribly wrong, I’ll be at the congress.

Great idea! We can either submit that as part of the CDC program or we can do it ad hoc in the chill-out setup.

Really want to make some people at #35c3 aware that they are Magicians as I think people from there could contribute and fit nicely in our ecosystem. Will also put a lot of these stickers on the sticker-tables - in the hope people check out what the Magicians are. 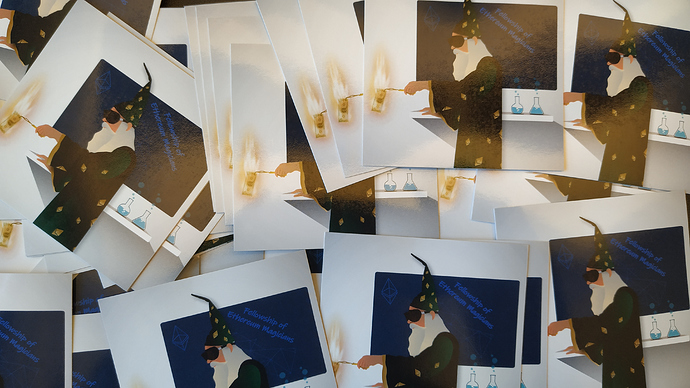 I’ll be there too and could help spread the stickers.

and a small teaser: https://peepeth.com/ligi/peeps/QmfKRF1PTK6RaFhJmsG6VJg9BGdPmTHeiZfMzpikrsdR1a

the wiki for self organized sessions is now open:
https://events.ccc.de/congress/2018/wiki/index.php/Static:Self-organized_Sessions

Thinking about adding a session there - just not yet sure which room - I am undecided between these 2 options:

would prefer banquette seating - but this is for a max of 20 humans. Would keep the topic quite open like “Ethereum Magicians gathering at 35c3”

Also what length should we allocate? I would tend to 60min.

Also thinking about a session on the topic of ethereum key management (talking about hardware wallets, java-cards, …)

Other ideas or suggestions?

I’ll be there! and ready to help.
60 minutes is good. Key management as well. I think that some general education would be ace too, and what we have been doing at magi about it.
The 48 people room sounds good. I think if we talk key management we will have enough interested people.
I’d like us to cover burner wallets as well, this is an interesting topic for CCC, happy to present it.

Hey @ligi any updates on this? I have to opt-out Friday due to work, so im trying to work my fahrplan

dam - I already registered for Friday a while ago - but just realized that I just posed it there:

Cool, ill be there! anything I can do to help?

great! Not that I am aware of - just wanted to have a loose gathering of magicians - don’t think there is a need for much preparation - but if you have ideas please shoot! Are you at location already.

(This is just a personal recollection, for the sake of posterity; you’ll see shortly that it’s of parts where I participated myself (what a surprise!..). Phrases in quotes are not actual quotes, but me paraphrasing.)

Of those present, ~10 (15?..) voiced one opinion or the other, or asked questions. Others participated in the “introduce yourself” part only.

The room was “almost big enough”, but there were not chairs for everybody. So, during several show-of-hands, we could’ve missed someone in the corner.

One person had a laptop open, but I’m not sure if they were taking notes, or just keeping an eye on the clock.

(I was one of the two “already satisfied” people, so zoned out during most of the discussion. Someone else could provide a summary…)

There was a brief shuffle on the balcony, after which the participants dispersed throughout the congress. Assume undocumented “work in workgroups”.

A session (unrelated to the above) was organised by @chriseth, to present JuliaLang; was not there, can’t describe.

I’m aware of no other Ethereum-related sessions. Ping if you do.

Thank you so much for this write-up!

Alexey’s second proposal, revolving around CREATE2 , was not discussed.

I have not got myself together to write the second version (needed to make some time for other things), but it will be done very soon.