On execution layer, the ETH comes “out of thin air” I assume? We can’t withdraw from the ETH2 deposit contract since if a lot of addresses withdraw we can get negative balance?

Yeah, this EIP specifies an unconditional balance increase with no source, just like how the coinbase reward works.

I know @axic has thought some about the accounting here and he may have more to say.

Hey all, I have an ask about this specific requirement:

The withdrawals in a block are processed after any user-level transactions are applied.

Is there a definitive reason why these withdrawals need to be processed after the normal transactions?

The reason I highlight it is cross-slot MEV. There are already serious concerns about BLS withdrawal keys that have been compromised, and best-effort out of protocol methods to mitigate this are being worked on, specifically focusing on the 0x00 to 0x01 change message feature being added.

My concern relates to an EVM EOA being compromised, which is probably a smaller impact than the number of BLS keys that have been compromised, but still should be considered all the same.

If an 0x01 recipient is compromised, and two actors hold the private key. They can be expected to bribe block producers for inclusion to sweep the rewards to a secure address. This bribe could theoretically approach 100% of the exited validator rewards, which at 16 exits per block could reach 512+ ether.

My concern is, if we process this balance change after all of the regular transactions, the funds cannot be swept until the next block, and could leave 500+ ether in limbo, which I fear could encourage bad behaviour like DoS’ing block producers.

However, if we process these withdrawals before we process the standard transactions, the funds can be swept the same block that they become accessible. I think this could be cleaner, and might reduce the stress that would be put on the network/BPs versus spreading this unfortunate situation across multiple slots.

What do people think?

Hi @OisinKyne, this is an interesting scenario… there is currently not any principled reason to choose processing withdrawals before vs. after the other transactions in a block and a strong argument one way or the other could change the route we go here.

Prior versions of this work had the withdrawals before and I wrote 4895 to say after as it felt a bit more right; but, only for keeping w/ the symmetry of the block subsidy paid to the block’s coinbase which is applied after the other transactions. It also seems to make MEV searching a bit easier as you don’t also need to bother with withdrawal simulation on top of all the other things you want to do when searching (as you can just use the prior block’s post-state as your starting state, without having to get some intermediate state of post-state + withdrawals.) Now, I definitely don’t think we should cater to searchers if we can think of a good argument one way or the other, but I do personally find weight to the “symmetry” argument, if only to reduce the complexity of what you have to remember when reasoning about the protocol.

This all being said, I have some questions about your specific scenario:

However, if we process these withdrawals before we process the standard transactions, the funds can be swept the same block that they become accessible.

If I can DoS proposers to capture the ether “in limbo” via after execution (by waiting until we get to a “malicious” proposer I control), can’t I also DoS them if we move to before execution and wait until we get to the same proposer under my control?

It seems that this decision doesn’t really change the outcome here, so I would still argue for after execution via the symmetry arguments I made at the start.

Do you see it differently?

Thanks for a quick response

So I do agree that there can be DoSing in both scenarios, but if balances are updated before, I believe the situation can be over and done with in one slot. If its after, it is at least two slots.

As for whether either approach would result in a meaningfully different outcome, I have no idea, I also agree that at the end is more ‘natural’ for a tidy up system operation, and feels sensible.

The reason I am averse to spreading MEV across slots is because I have a fear that that can be centralising. Obviously in this case I hope what I am describing is an extremely rare phenomenon, and won’t ever meaningfully impact returns, but previously I have been concerned that contiguous block production being in the hands of one party can allow them to cause harm to systems that were built with assumptions from the PoW era, where no one could reliably control consecutive blocks. (Uniswap TWAPs being the obvious target imo)

I wrote this blog post nearly a year ago that I never ended up publishing, and it is not 100% accurate anymore considering 0x01 and PBS, but I guess I just want to highlight where my concern is coming from and why I am chewing on whether withdrawal processing before or after normal transactions could mitigate or exacerbate the situation.

I think with the existence of mining pools, the situation here is not that different moving from PoW to PoS and in fact may improve as the barrier to entry as a “solo staker” is much lower than being a “solo miner”.

This EIP shouldn’t reference EIPs that won’t make it to final, and the motivation isn’t the right section for describing alternative options.

In the motivation, remove the references to “alternative EIPs” and instead in the rationale very briefly describe the other options (a sentence or two is usually fine) and why they weren’t chosen.

Recommend removing the reference to EIP-3675 and the empty ommers list. This EIP could be implemented even if the ommers list isn’t empty, so there is no dependency and if we change our minds on emptying the ommers list for some reason then we would want this EIP to not suddenly become incorrect.

Also, it is unnecessary information to readers of this EIP and shorter is better where possible. 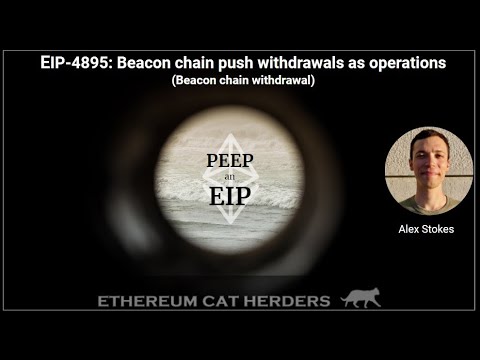