I’ve written up an EIP proposal “Subscription Token Standard for NFTs and Multi Tokens”. Been busy lately but this proved very useful in my own dapp so thought I’d share.

One of the features that I really like about it (being as unbiased as possible) is the notion of subscriptions as a thing of value, which it has as it is exchanged for ERC-20 tokens. And if an implementer so desired, they are able to make them tradeable by implementing the remaining methods of ERC-20 that the specification does not cover.

I kept the spec minimal so that it can be as general purpose as possible. I also kept my mind open to future uses of NFTs and tried the best I could to ensure that this standard would cope with that.

This spec does create some implications on control of NFT lifetimes. This area is probably not as or yet to be fully developed by existing EIPs, and I don’t think it clashes with anything out there?

My particular use case for this proposal is numerous from:
Streaming services
Club memberships
Season tickets etc.

Other use cases I see are:
Renting of digital assets
Fixed rate to variable income in DeFi
etc.

My main motivation was to come up with a way to help loosen the stranglehold around content creators so they can administer their own subscription service eco system. 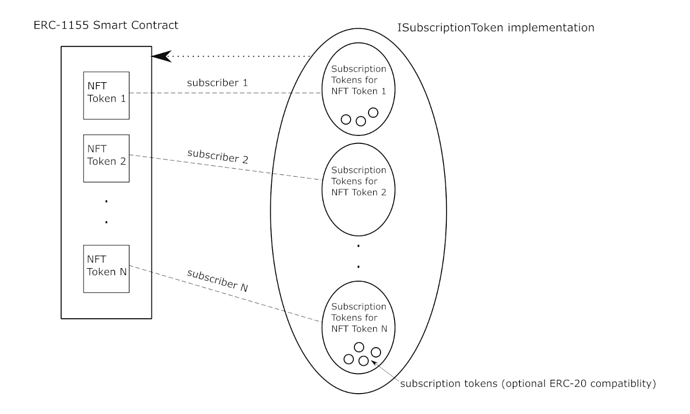 I’m thinking that this diagram might help cement the idea of subscription tokens.

The EIP proposal (not yet in draft) can be found here:
https://github.com/julesl23/EIPs/blob/master/EIPS/EIP-Subscription_Token_Standard.md

This is done once for each type of subscription service offered by provider:

The rule is that once the linearly depreciating SubscriptionToken.balanceOf() falls to zero, then the subscriber’s subscription expires. Subscriber can buy more SubscriptionToken to top up the balance at any time.

The uri could be a link to NFT tokenId’s metadata for the legal agreement between provider and subscriber, or a digital asset etc.

If SubscriptionToken implements ERC-20 then it can be traded on secondary markets, or sent as gifts to others, or be refundable etc.