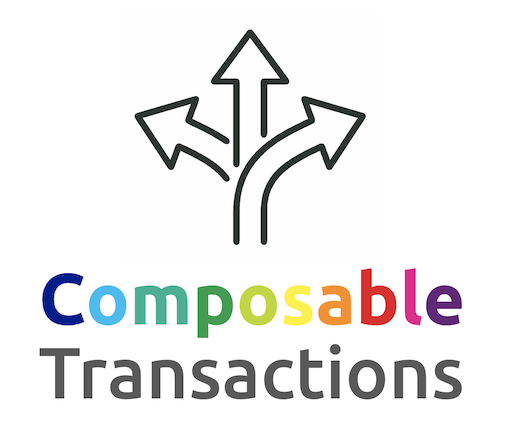 Composable Transactions bring the ability to make many calls in a single transaction, either to the same or to different smart contracts.

Even more than just calls, this feature allows a variety of commands to be executed, including storing the result of a call into a (temporary) variable, conversion of the value, math operations, and assertion (reverts the whole transaction if evaluates to false)

If any of the calls fail, the entire transaction is aborted.

This means that either all calls succeed or none of them.

Execute a series of contract calls with the guarantee that they happen sequentially with no external action occurring between them.

This is useful when another transaction arrives first and changes the contract state.

Instead of just a list of calls, it is possible to process the returned values and act according to them.

The user can check each command and its arguments

The scripts contain the function signature (human readable). The function selector is computed at execution time

1) Purchase airplane tickets and hotel reservation from different contracts, only if both succeed. If some of the purchases fail, the other is reverted (the user does not want one of them if the other is not acquired)

2) Swap token and buy something with it. If the purchase fails, the user does not want that intermediary token

5) Mint many non-fungible tokens (NFTs) in a single transaction

6) Trustless swap (or purchase): check if the purchased token was received, otherwise revert the transaction

7) Swap tokens using a split route. Check the minimum output in the transaction itself and revert if not satisfied

8) Swap to an exact amount of the output token when using a multi-hop route, by querying a contract for the right amount to send in the same transaction

10) Approve, use resource, and remove approval on a single transaction, with the guarantee that no other operation would happen in between while the resource/token is approved to contract B

As most clients use web-browsers, the scripts are built in JSON format, like this one:

As this format is not efficiently processed by EVM code, it is then converted to binary format using a small library on the browser (or another environment)

The transaction is marked with a special “type” to differentiate from normal transactions.

But it can have some other method, like a explicit type (MULTICALL or SCRIPT …)

The execution client can identify these transactions and process them accordingly

There is no reference to this contract on the transaction

The execution client calls a function on this contract passing the binary script as argument.

The call is made using the CALLCODE opcode (0xF2) executed as the caller account.

The binary format is engineered to minimize gas usage when processed

As the script executor is a smart contract, other contracts can also interface with it using the DELEGATECALL opcode (0xF4) and passing the script as argument.

One use would be by MultiSig wallets and DAOs, in which scripts can be stored, reviewed, voted, and only executed when/if approved.

While they don’t work with EOAs, 4337 user operations already achieve this.

Wouldn’t be easier and straightforward deploying an orchestrator contract to make a single entry point to trigger many transactions?

Notice also that our approach goes beyond just contract calls. The supported operations allow a range of new use cases, that are not possible with just a list of contract calls