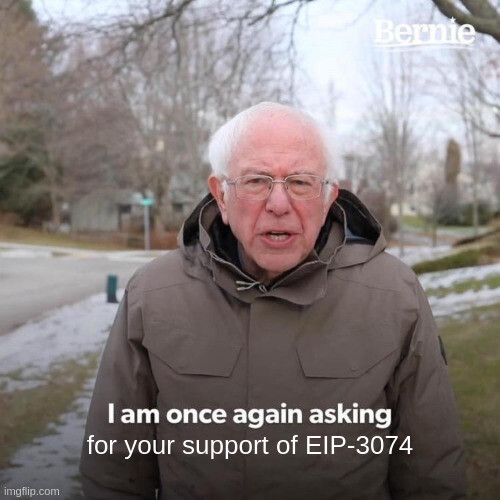 Early last year, I felt there was a real possibility of EIP-3074 being included in the Berlin hardfork. The authors pushed to get the EIP into a stable state, but it was a bit too late and there were still questions around the security of it.

To resolve these security concerns, we had two security audits of the specification [1, 2] which both came back clean. We then reapplied the EIP for CFI for London. It was subsequently rejected to keep London simple, but with the understanding it would again be considered for Shanghai.

Well – Shanghai is finally just around the corner! The EIP has been stable over the last year and there are no additional changes to consider. I would like propose the EIP for Shanghai (again)! There are many resources to understand the benefits of EIP-3074, however I want to point out two specific points that are particularly relevant today:

Please note: I’ve requested a small change to this EIP (specifically, how tx.origin is handled in a world where the gas payer and account “doing the thing” are no longer synonymous) and hope that it can be considered and discussed before moving forward. See here:

Without this change, 3074 will break the way some of my 2015 smart contracts handle NFT ownership.

We somehow have 4/5 EIP editors in support of this

- @gcolvin is the only person that hasn’t liked your post (yet). Too bad we can’t participate in governance…

I’ve been a bit out of the loop on this over the last year. I’ve got some brass tacks questions that might be easy to answer / point me to the right resource:

To resolve these security concerns, we had two security audits of the specification

I think the audits actually came before the security concerns I raised. The audits were finished on the June 14 2021 and May 19 2021, and my post above is from June 16 2021 and mentions risks that are not in the audits, as far as I recall.

I’m glad to see chainid was subsequently added to the signed message, which mitigates one of the attacks I demonstrated. Thanks for adding that!

I still feel that the risk outweighs the benefit, for the reasons I mentioned before. E.g. no way to revoke a previously signed AUTH. Revoking is hard to implement, but how about a deadline block number, like the one used in EIP 2612? It would at least cap the risk to recent approvals.

Even if we had a way to revoke old AUTH or set a deadline, attacks like the Governance Hijack I described would still be possible. (Quick reminder: an invoker that helps users do something useful, but also delegates their voting tokens to an attacker. Users won’t notice anything since they still have the tokens, but the attacker steals everyone’s voting power).

Another concern is that EIP 3074 enshrines certain things we’re trying to change. It enshrines ECDSA signatures, which we’re working to abstract away. At a higher level it enshrines the EOA model rather than move Ethereum towards a contracts-only model.

Despite EIP-4337 existing for over 1 year, I’m not aware of any wallets that support it.

While EIP 4337 hasn’t been finalized yet, and new features like BLS aggregation are still work in progress, there are several wallets being built around EIP 4337 and a growing community of developers around it. Building wallets takes time, and they’re doing it while the EIP is undergoing breaking changes.

To name a few, Stackup is ERC-4337 compliant, Candide is making progress, Soul Wallet is building an 4337 wallet for soulbound NFTs. I’m aware of a couple of others who haven’t published yet, and a couple of teams working on ERC 4337 tooling to make wallet integration easier. You’re welcome to monitor progress on the Account Abstraction discord.

While ERC 4337 is not a protocol change, I think we can build upon it and get all the benefits of EIP 3074 and beyond, without compromising on security. I hope we can join forces and work on a set of EIPs that will take us there.

how about a deadline block number, like the one used in EIP 2612? It would at least cap the risk to recent approvals.

We can of course implement this in the EIP, but am generally against ( as you are aware

) because it reduces the flexibility of the mechanism. It is a simple mechanism to implement in the contract, and that is where I believe it belongs. Developers must be able to handle implementing code which is secure, and wallet teams must ensure their users aren’t exposed to insecure invokers.

as you are aware

Yep. We already agreed to disagree on this philosophy

I’m with you on giving developers as much flexibility as possible, but my concern is about the inevitability of bugs (or even maliciously introduced, well disguised “bugs”). On the trade off between making AUTH indefinite or limiting it in time, I’m (a little bit) inclined towards the latter.

But I acknowledge it’s a trade-off so I’ll counter myself and highlight a valid use case that my deadline suggestion would prevent. Session-keys for games, like what ArgentX implements. Sign an authorization for a game to perform a specific type of actions on your behalf so that you don’t need to sign each one. Usability is indeed better if you don’t need to re-sign the AUTH every 30 minutes.

It’s possible to support this use case with account abstraction, e.g. an ERC 4337 wallet with a validation function that allows different keys to perform different actions. And it’s possible with a specialized EIP 3074 invoker that only transacts with the game contract. But limiting the authorization to a deadline breaks it.