Every person who I’ve spoke with that contributed to the development of web cookies considers it a failure because they didn’t consider privacy. They at least have an excuse that privacy was a second order problem that hadn’t even been realized when they made it. We can’t say the same about this today.

Just a quick note to every person who ever develops any sort of identity-related tech from this moment until the end of human history (a purposefully large net) – pay attention to these words.

Everything I see (excluding this, perhaps) seems almost designed on purpose to create a massive privacy nightmare in the future.

I understand those general concerns about privacy as data generally isn’t deletable on blockchains, but I’d also like to stress that there are widely cited academic publications, most notably H. Nissenbaum’s “Privacy as contextual integrity,” that build an entire framework for specifically evaluating uses cases based on their privacy where pre-existing norms are considered and it is checked whether those norms are challenged.

Hence, through this lens, generally saying: “Using SBTs/cookies is a bad idea for privacy,” is arguably not reasonable as the underlying reasons for a certain flavor of privacy are culturally specific. E.g., cookies, when not being used as third-party tracking devices to spy on users for the sake of data mining their shopping preferences, are a completely fine tool for web developers, e.g. for implementing sessions.

In fact, I’ve used cookies many times in my career, and I’ve never “accidentally” data mined my users’ data and sold their data to advertisers! It’s not only a design question - it’s also about a person’s integrity and responsibility!

It’s vital when using cookies, SBTs, ABTs, or any other technology, especially when we’re dealing with PII, to understand how to evaluate the software in Nissenbaum’s contextual integrity framework.

If this is done appropriately and with a good faith, then I don’t see any problems with developers using cookies, SBTs, or ABTs.

Soulbound Token Workshop at the DAOist 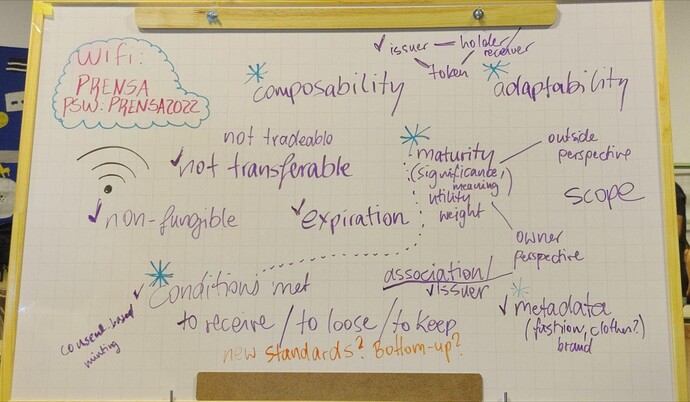 Original source: Soulbound token workshop on use cases at the DAOist in Bogota - HackMD

Soulbound token workshop on use cases at the DAOist in Bogota 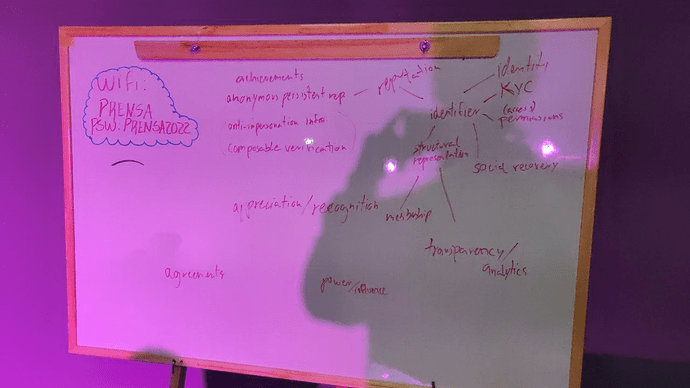 I come from this thread, then I found this EIP very valuable.

We are thinking of using this EIP to build a dapp comment sys for decentralized due diligence. VCs (or web3 users) need to do due diligence on dapps. They will send invitations to professionals in related fields. The adoption of reviews can be confirmed through an asymmetric method like give/take.

Previously, the comment system of the Internet was permissionless: your review of something does not require the relevant parties’ aggreement. This leads to spam and fake reviews. The reason may be that the previous Internet pursued the maximization of information efficiency, not the maximization of trust.

This EIP can be used in scenarios like “trusted reviews” and “recommendation letters”. The form needs to be directed, but it requires the consensus of both parties. This traceable review sys unlocks a lot of new possibilities.

Any suggestions or further reading links? Hope to hear from you

Hey, glad you’re finding it helpful. The probably most extensive links on the topic can be found in the most top post of this thread.

Forgive if this was discussed before, I haven’t read the whole discussion yet, but one comment I have about this EIP is that because give and take have the URI as a parameter the EIP is not compatible with generating the URI in the contract. This may make minting unnecessarily gas inefficient, and it may limit some use cases as well. What do you think about changing string uri to bytes metadata where the metadata is application-specific, it may be a URI string or it may be ABI encoded parameters and so on. With this design, it would probably also be useful to add a getter that can convert application specific metadata to a URI so that the URI can be known prior to minting.

What do you think about changing string uri to bytes metadata where the metadata is application-specific, it may be a URI string or it may be ABI encoded parameters and so on.

I think this is a useful suggestion that I’m personally in favor of implementing. For the stakeholders lurking here: Does anyone have strong objections?

With this design, it would probably also be useful to add a getter that can convert application specific metadata to a URI so that the URI can be known prior to minting.

Mhh I’m not sure what you mean exactly. Would you mind elaborating?

Thanks for your feedback @frangio!

I’m thinking of a scenario where a user has an Agreement signature in their wallet that is ready to be redeemed via take. With my proposal, the value that is agreed upon and that the wallet will be aware of is not a string uri but an abstract bytes metadata value. But the wallet will likely need the URI for display purposes, so it needs a way to obtain a URI given some metadata. What I’m proposing for that purpose is a function makeURI(bytes metadata) view returns (string) in the ABT contract.

OK. I think we may want to prototype this in the reference implementation over at GitHub - rugpullindex/ERC4973: Reference Implementation of EIP-4973 "Account-bound tokens". Would you be interested in giving this a shot? And then we can also make changes to the specification. I had informally talked about your suggestion with some of the specification’s stakeholders and they all seemed welcoming of the change.

@rsquare’s lightning talk at devcon on EIP-4973 and how they use it in Otterspace: ERC Lighting Talks - YouTube

Hey all - I believe the Interface Id should be 0x8d7bac72 instead of 0x5164cf47 in the spec. If makeURI is added tho it’d change again - just wanted to leave the note here for anyone else looking at it before updates.

I might have some time next week to prototype the bytes metadata change, ERC-4973 is pretty awesome

If this is done appropriately and with a good faith, then I don’t see any problems with developers using cookies, SBTs, or ABTs.

This is the point I’m making. I’m not saying any particular single developer’s actions (all of which, I agree, are done appropriately and in good faith) are bad (or even can be). I’m saying, in the aggregate, over time, these things morph into something none of us want. To the extent that the today’s conversation focuses on individual use cases and does not give equal mention to the (I would argue obvious) long-term negative second-order effects, I think we’re making a mistake.

Thanks for pointing this out, I’ll fix it.

Some internal discussions in the EIP-4973 Telegram group have reasoned that it doesn’t really make sense to replicate the now-final logic of EIP-5192 Minimal Soulbound tokens here in EIP-4973 and that the specification’s differentiating quality is consensual minting. So some have said that we should, e.g., pull out consensual minting into its own specification as it’s arguably useful for transferable NFTs and potentially even scalar tokens.

But then @glu pointed out that we could do the inverse of it, which is removing all the account-binding nonsense that has caused so much controversy and essentially keeping the consensual minting and I don’t know why but it’s making tons of sense and is something that we can also reasonably standardize as “final,” whereas all the account-binding and soul-binding related concepts are still too early to opinionatedly finalize.

Over the long term, I think we’ll need account abstraction for that, and the Ethereum space isn’t ready for it yet, sadly. Besides, we have addressed account-binding in an un-opinionated way in EIP-5192, and so I’d see EIP-4973 and EIP-5192 being usable in combination too.

What do stakeholders here think?

While “removing all the account-binding nonsense” may appear more accessible, that would no longer be the same EIP, idea, or surrounding considerations.

Consensual minting is functionally just a nuanced implementation of any token standard, 20, 721, 1155. It is not something that needs to be solved with an EIP that removes all ability to use the existing and properly standardized tokens. The ability to standardize the process without significant feature loss is possible.

To that, the idea of genuinely consensual minting is only possible through account abstraction (using contracts to block unexpected mints) or having the minter opt-in. Today, the EIPs of 20, 721, and 1155 are already designed for consensual minting. It is just opt-in, which the proposed EIP would also be.

If the situation is entirely reliant on the minters opting in, I would expect it to be a token-type extension rather than an entirely new one. Further, extensions have not historically been designed for use cases but rather essential functionality that individuals can build on, given their own opinion and use cases. This EIP and proposed actions carry a large amount of opinion and use-case specification. I would appreciate an EIP that provides new functionality (an extension) without being so limited as the current and future (consensual minting) currently stand.

As referenced in your previous comment here,
EIP-4494 which is serving a similar vertical, is an Extension, which at most, this EIP would and should become given the complete removal of “account-bound” functionality.

With this, though, I would not favor EIP-5484 either as no above-mentioned proposal solves the problem without massive and broad-reaching implications and assumptions.

To the relevant conversation here, EIP-5192 is much better defined however still riddled with issues and misalignment in the way standards are written. Prefer to see further clarity before supporting anything or seeing another half-built EIP that drowns in nuance.

I think the main idea behind removing the “account-binding nonsense”, is in semantics and wording. I’d argue that consensual minting is the crux of what has been discussed/developed here ad nausium and the update I was referring to brings the spec up to date with that design.

I think we risk running around in circles further trying to argue/define the canonical Soulbound/Account-Bound/Consensual/Non-transferable EIP when I feel like those terms only recently came into the zeitgeist and don’t even have fully agreeable definitions. The most conversation I’ve seen are links to Glen’s paper, Vitalik’s articles, and some Twitter threads. Semantically, one could argue specs referencing non-transferable NFT is a misnomer since it involves an initial minting, but I digress. So definitely in agreement that we can take out some of the opinions.

I think with some of those nuanced phrasings removed/updated, which I will take a stab at, we could take a step back and really see what this EIP is all about. Going forward I think we (me) can provide some more examples on top of what @TimDaub has already given to convince myself and others that this EIP is warranted and will be beneficial over other specs.

Consensual minting is functionally just a nuanced implementation of any token standard, 20, 721, 1155. It is not something that needs to be solved with an EIP that removes all ability to use the existing and properly standardized tokens. The ability to standardize the process without significant feature loss is possible.

How do wallets/explorers/marketplaces etc. coordinate on implementing consensual minting without a standard/protocol?