Not sure if this actually fully solves the problem that this EIP intends to capture, and again I definitely do not have a strong horse in this race, but has the approach of functionality limiting the amount of state change caused by a given usage of SELFDESTRUCT, by way of changing the op-code pricing for the opcode in order to more directly bound state change to the current gas limit, an approach that has been considered?

Could definitely understand that this type of approach would be impractical with regards to the client complexity it would add to calculate gas costs in a way that fits the state-change-bounding constraints that are driving this PR, but figured I would ask!

Perhaps a change to CREATE2 could be considered in concert with this, such that it checks for existing byte-code and quietly fails rather than reverting.

That is an interesting idea. You could probably set it up so that CREATE2 will allow you to deploy the exact same bytecode to the same address, but fail for all other code.

I’d be concerned about the case where someone expects SELFDESTRUCT followed by a CREATE2 to clear storage, which wouldn’t happen. 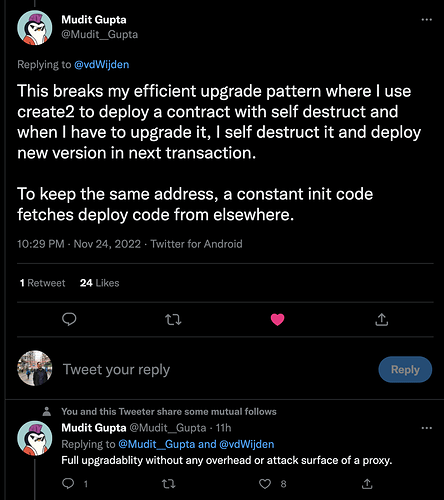 Yeah, this wouldn’t cause issues for my particular pattern

While we are still evaluating how to kill SELFDESTRUCT I think we can officially deprecate the existing SELFDESTRUCT.

Here is an EIP for that Deprecate SELFDESTRUCT

If you only read the Yellow Paper then you probably don’t know you shouldn’t be using SELFDESTRUCT. That EIP fixes that.

Bumping for curiosity sake, is this approach just not tractable / doesn’t solve the problem seeking to be addressed by client teams?

Wanted to bump after seeing EIP-4758: Deactivate selfdestruct - #30 by timbeiko from @maxsam4

Unfortunately it doesn’t solve the problem of having a strong guarantee that if a piece of code exists at a particular address then that same code will always exist at that address.