I think your design is missing a mechanism to initialize the memory state of the proxy when the logic contract is updated.

updateCodeAddress must include much more then just updating the targeted logic. It potentially needs to reset the memory state of the proxy and configure the new logic. An exmaple is that, if you have an identity proxy that is a simple ownable contract, and you want to update it to a multisig, you should cleanup the owner and set up the multisig persmissions in a single transaction when updating the logic. This is why I include semantics for initilization function, and pass bytes to describe initialization operation.

I think the addition of “re-initialization” code is a great suggestion. I wouldn’t go as far as say it’s a reset, but definitely it’s a process that might be needed. Although there is already space for it happen, I agree that it’s not the best user experience not having it in a single tx if possible.

I will think a bit and suggest an implementation for it.

I think state reset is needed for 2 reason:

That is why I believe some data should formalized by ERC1836 to stay as an invariant — nonce / nonceless replay protection / identity generic data (from ERC725) for example — and everything else should be cleaned up.

We could however see the cleanup as a layer on top of the standard, with the basic updateDelegate / updateCodeAddress not performing the cleanup and an added cleanup function that would clean then call the upgrade mechanism. That way you have the choice to cleanup before upgrading or not (in a single tx)

A reset is something potentially impossible, or at the very least cost prohibitive.
If you are upgrading from multisig1 to multisig2, you are not just randomly pointing to another implementation but rather something more like fromMultisig1ToMultisig2 implementation/logic contract.

Also, I remember from a conversation with Fabian where his was proposing (when discussing identity) those contract whose address are beacons (not meant to be changed, such as the 725) be managed by some other contract. This came up when talking how, in this particular case, a 725 is often managed by a single owner but in the future might be managed by a multsig. In his view, when it happens you change the owner to a 734 contract. I think that’s the best option for when changes are quite drastic ( although I do see how you could potentially make it happen with a “simpler” upgrade).

I believe multisig1 and multisig2 cloud be ERC1077 (universal login), gnosis safe, uport, … things that you may want to move from and to in no particular succession.

You missed the point of UUPS hahaha. You wouldn’t really deploy the whole 734 every time, just deploy an UPPS and point to it.

The multisig owns no asset

But it manages a contract that has assets. It is able to implement 1077 with no trouble and ask the 725 to issue the repayment. All this while the other systems are completely unaware of what is really going on with the setup (734->725).

By calling the ERC725 proxy you would not be able to access info from the multisig.

As of now, it’s not part of the ERC725, and for that, I agree that it is not straightforward. But you could have an implementation of 725 that is aware of outside management, meaning another contract.

All this to say, that you really don’t need to resort to “state” resets.

Once a user deploys a contract with a vendor, they will be very limited on migrating it to another vendor’s implementation. Therefore, it makes sense that vendors will keep track (as they have), of their implementations, and when updates/upgrades are available they will have to check for compatibility. We can only try to make this less of a “locked with a vendor” kind of situation. And I think decoupling where possible, as 725 being simple but managed externally is one of those measures.

You missed the point of UUPS hahaha. You wouldn’t really deploy the whole 734 every time, just deploy an UPPS and point to it.

But it manages a contract that has assets. It is able to implement 1077 with no trouble and ask the 725 to issue the repayment. All this while the other systems are completely unaware of what is really going on with the setup (734->725).

In the end it’s a matter of personal preferences. I see the point of your organisation. It’s less likely to break but is more expensive. I see mine as being more elegant and cheap, but also more complex for SCs developers

Next iteration will have a solution for it.

Glad we could talk.

Another difference is that the storage slot is intentionally choose as “Proxiable”, and not a random string. Again, this helps us standardize the process.

To improve compatibility of this proxy with existing and future solutions, I think it would be much better to use the slot defined in EIP-1967: Standard Proxy Storage Slots. @pi0neerpat Can you explain the reasons why this was explicitly decided against? We’re trying to move said EIP to Final state and it would be good to have UUPS on board.

We really do like this model and want to provide an implementation of it in OpenZeppelin Contracts but the choice of an incompatible storage slot sticks out as a problem for us. For inclusion in OpenZeppelin it would also be necessary to move this EIP to Final.

We are on board too with this new 1967 storage slot naming. Working on it here and will report back here once we are finished https://github.com/ethereum/EIPs/pull/2750

Currently the purpose of proxiableUUID is not well explained.

It seems to me it would be made more useful, if it would be about differentiating different types of logic contract as opposes to the slot of the implementation:

While in actual implementation of a specific contract:

Yes the language here is vague about what the uuid could be intentionally. Would adding some more examples here be helpful? Or would you want to see the section changed to explain more about how uuid should be used?

The code example from the proposal is:

And that is suggesting proxiableUUID is basically the slot ID, which I find un-useful. If I wanted to distinguish different type of logic contract, I would rather use the UUID scheme I proposed in the previous reply. Is that close to what you have had in mind, or I have deviated from the original idea?

Is this thread still going on ? I would love to ask some questions that I found very interesting and confusing by following this EIP …

Definitely post whatever you have to ask here, Discourse puts updated threads on top on the Forum home page.

We have been using it (with some extensions) at Superfluid.finance, would love to push this forward more.

@pi0neerpat what do you think?

A wonderful overview with superb Remix demo of Universal Upgradable Proxy Standard by @pi0neerpat & @gbarros on Peep An EIP. Recording available to follow 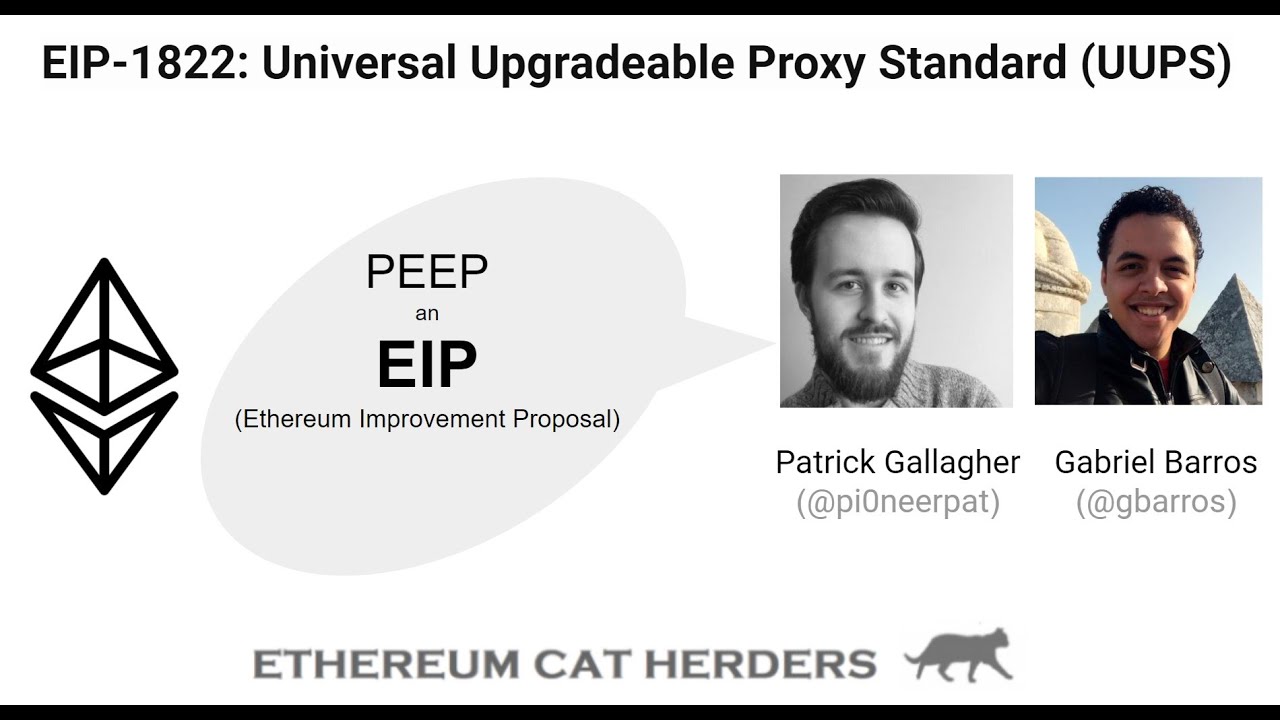 Hello,
While experimenting with proxy patterns, and trying to come up with an implementation that would be nice and modular, we realize there is an issue with the proxiableUUID as a security mechanism.

proxiableUUID() returns a specific value that is supposed to help distinguish between a UUPS compatible logic, and any other smart contract. The point being that is we update a proxy to point to a non-UUPS compatible contract, this would not include/expose the necessary upgrate mechanisms, and this would break further upgradeability.

However, there is an entier class of contract that do expose the proxiableUUID logic but do not contain the corresponding logic: UUPS proxies.

Thus, we feel like the security mechanism described in ERC-1822 is not good, and should either be removed or modified.

@pi0neerpat How do you feel about removing the proxiableUUID mechanism from the EIP? The resulting EIP would only document the UUPS pattern and not impose any restrictions on the ABI of implementation contracts. I’m not sure if this is compatible with the original goals of the EIP.